As part of the R&D work on port! datatype in port-type branch, we have implemented a GPIO driver for Raspberry Pi boards, as a gpio:// scheme (no third-party library needed). This work helped define the low-level API for ports written in purely Red/System or a mix of Red and Red/System.

The Raspberry Pi is a very popular board with millions of units sold, so this is a market where Red could be potentially helpful to developers. We could run Red on such boards for years but did not have proper GPIO support, so this is now fixed!

The current features supported by the GPIO port are:

Planned (but not scheduled) future features include:

The source code for the gpio:// scheme can be found there.

In the short video below, you can find a little pet project meant for testing some of the features. It implements a simple joypad with 4 directions support, a red LED indicating when the pad is active and a green one for notifying when a level is completed. The game is the Red port contributed by Huang Yongzhao of Rebox!, my old clone of BoxWorld written in Rebol. In the video below, it is running on a Raspberry Pi 3 using our work-in-progress red/GTK backend for Red (contributed by Rcqls), locally merged with the red/port-type development branch (EDIT: that branch has been merged into master now).


You can find the breadboard layout below made using Fritzing. Sorry for the messy wiring, it is my first try with such kind of tool. If you have the skills to improve it, here is the sketch file. The buttons rely on the internal pull-down resistors. Note that in the video, the board is reversed. 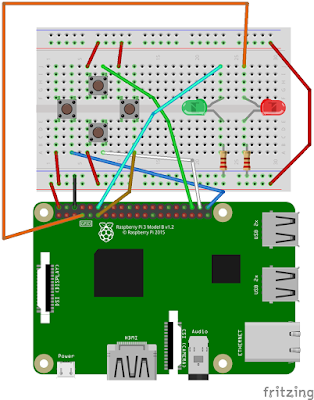 The source code of Redbox has been modified to add GPIO support, you can find the modified code here. The GPIO-related code is enclosed in a context:


The GPIO port has a simple API:


Write a value on a pin:

Read a value from a pin (the returned value is in port/data):

Write a PWM value on a pin:

Wait for a given duration: